Four years ago, fourteen Indians had set their wheels rolling across Paris to conquer precisely 1230 km within 90 hours. Out of the dozen only two managed to complete the oldest bicycle race on the planet – Paris –Brest – Paris (PBP). The two standing legends known by the name Sameem Rizvi and Kailas Patil have achieved a lot more in the tiny bubble of Indian cycling. However, things changed over the last few years. More cyclists achieved the title of ‘super randoneeur’ and set their eyes to take on the world’s 1230 km journey.

This year out of the total 6000 participants who came from countries like Brazil, Canada and many others India was represented too. With a total number of 53 participants ranging from the age of 21 to 60+ India had high hopes of getting many accolades and that’s what happened. Out of the total figure, 22 managed to complete the distance and 21 finished within the given time limit. 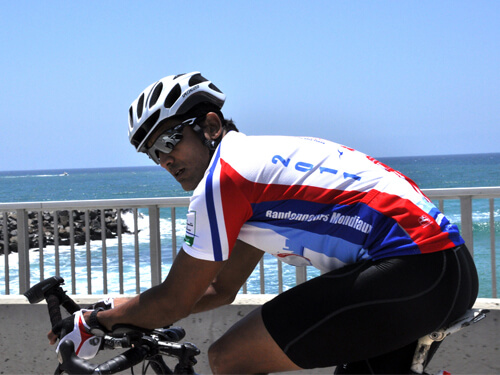 We recently caught up with the fastest Indian Pranaya Mohanty who finished the race 5 minutes behind Sameem Rizvi. Mind you, he still is the fastest Indian at Paris-Brest-Paris 2015 edition without a doubt. When our own Abhishek Tarfe met Pranaya Mohanty India PBP for the first time, little did he know what to expect. With dozens of questions already running in his mind, he finally managed to have a long chat over some hot chocolate with the machine. Read on…

As you might think, as a child Pranaya Mohanty was never a fan of cycling, not that he disliked the sport. Little did he know that he would be so glued to his bicycle! Born and brought up in Orissa, Pranaya came to Mumbai and worked for a well-known company. As he had weekends off, he would get bored staying indoors and always looked for something beyond his ability. He would often be seen running early morning lapping around his society compound. People laughed at him as he went round and round. Somehow it didn’t make any sense to them after all.

For starter’s Pranaya Mohanty India PBP participated in numerous marathons and would often travel one city to another to complete them. 10km’s, 15km’s, half marathons and full, he has done them all, still does. Besides, his love for running, trekking also occupied his time on weekends.

It all started on 13 December 2014 when he participated in his first every BRM 200 (Mumbai – Nashik- Kalyan). Little did he know about the importance of lights then. When Anil Uchil warned him and gave him his lights, Pranaya Mohanty India PBP was good to go. He completed the 200 and participated in other BRM’s across different cities too. Within a span of a month, Pranaya had achieved a lot that others would only desire. His name was engraved in the list of Indian Super randonneur. Besides, he also managed to pull out 1200 km on his Rockrider 5.1 under torrential rains.

When Pranaya Mohanty India PBP was cycling with a dear friend Xerxis Tampal, he enlightened the future PBP finisher about the upcoming event. After the conversation was done, Pranaya was motivated to complete the gruelling 1230km in a different country. Due to financial circumstances, Pranaya had to think of raising money for his own dreams. With great expectations, he approached his own company but was put down not once, but several times. Such is the case of endurance racing and many other sports in India.

He decided to work harder and attempt the ride in 2019, but his fans and believers did not like the idea of him withdrawing at the last minute. They all got together and cooked up a plan. Big names like Anil Uchil, Mohindar Singh Bharat, Mukund Thakkar and dozens of others chipped in and took care of his round trip to France and back. 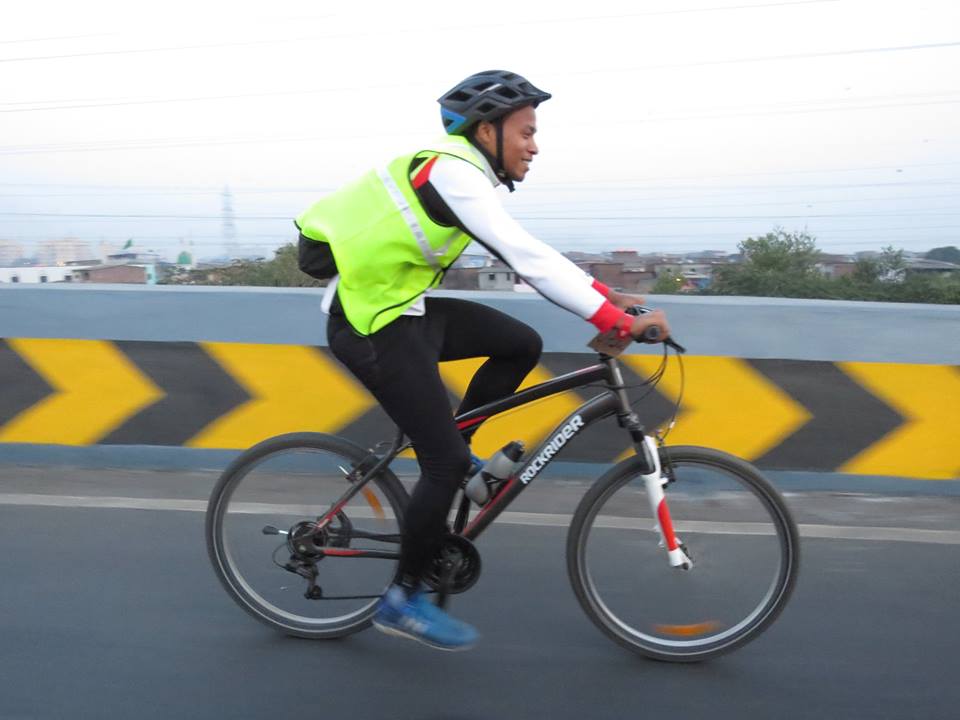 There was no way this warrior who had big names supporting him was going to be permitted to attempted the race on a 17 kg bulldozer. A road bike would make a big difference to his performance on the overall. As an MTB rider till now, Mukund who owns mastermind bicycle studio offered Pranaya Mohanty India PBP a good deal on a new road bike and other accessories. When he arrived in Paris, he shared a room with Mohindar Singh sir who was the best guardian he could ever think of having by his side.

When the race was flagged off from St Quentin de Evelines on the outskirts of Paris, Pranay decided to stay ahead of the peloton. With zero experience of riding in a group he didn’t want to be a part of an accident or the cause. He rode to the first time stations (220 km) with Brazil randonneur’s where they all took turns and rode at a higher cadence maintaining high speed. They all took their turns and so did the machine, protecting others from the cool breeze and drafting them whenever he was required.

After the first 220km, Pranaya Mohanty India PBP was riding alone. Riders were at the back and many of them in the front. He followed the same rules as the Brazil and Canadians, they maintain high speed, covered more distance and took breaks only at time stations. After recovering the entire process was again repeated. He reached the turnaround point well before cut off and little did he know the rest of the Indians were tailing him far from reach. The weather would be in the early 20s throughout the day and when the sun went down, the riders had to face temperatures of between 6 to9 degrees. With little preparation against the cold, Pranaya pressed on. He felt that the 1230 Mumbai- Indore-Mumbai which he did a month back was too easy. It has less of gradients, while PBP was a killer. His advice to those attempting the race in the future should be to train for a lot of climbs.

He came across numerous time stations where he had to stop to grab a bit. He had no food on him and had to rely on these small food joints. He even got a chance to interact with the French people who were very kind. No matter what time the clock displayed, they offered him coffee and tea and even a bed to crash. He stated that they were a big motivation when it came to pushing a cyclist to complete the race. What more could a cyclist require when he chooses to live for days on a bike?

By the time, he completed 1000km he started experiencing mild pain in his knee. A little adjustment in his seat and he was good to go. Soon he met Divya Tate who was maintaining a board at the last time station. That’s when he got to know about his status, he was delighted to know he was leading the list of the 52 Indians.

So Pranaya Mohanty India PBP pushed on and reached the 1230 km mark in 74 hours 19 minutes and become the first Indian to finish Paris –Brest – Paris in the 2015 edition. He was delighted than ever. With no finance to support his own dreams, no house booked in Paris to relax, but only good will – Pranaya and the other 21 Indians did it.

From his experience, he would like to advise the future randonee that, you need to keep at least 15 hours for the last 200km. The climb, the fatigue due to lack of sleep is sure to overtake your will to continue. He also feels that riding in India is much better in the night than in Paris as we Indians are not used to the cold. He also added that you are likely to waste time when you needed to get your card stamped so be prepared and act accordingly. 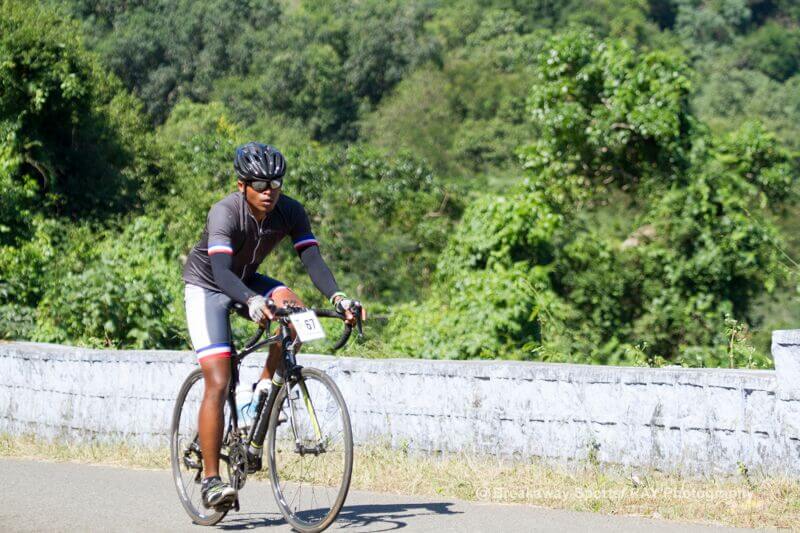 As we walked out of the café, he said, I still can’t believe my stars, the goodwill of the people. He pinched himself to believe that it was not a dream, but the reality of conquering PBP that got his name into another book. He dreams of attempting it again, but until then Pranaya intends to do the Audix rides in India and focus on LEL and Ironman in the near future. Deccan Cliffhanger and Race across America are on his mind too. Until then, keep riding and keep smiling.