ChaitanayaVelhal is one among those who has dreams to Race across America. Besides having several wins in different categories, chai, as he’s fondly called, is also an Endurance cyclist, Triathlete and indoor spinning instructor and a personal trainer at Multifit , Kalyaninagar. This year he went as a crew member for Joan Deitchman who has successfully completed RAAM thrice. Read his experience as her crew member that not only helped him understand the race, but also strengthened his resolve to fight harder… Like any other ultra cyclist, for me too, RAAM was the biggest dream for Chaitanya Velhal RAAM. After winning the Deccan Cliffhanger in 2014, I started channelling all my energies towards making my RAAM dream come true. I enlisted the services of Divya Tate, who has had considerable RAAM experience and is well known in the Indian cycling circuit.

To realise this dream I wanted to get familiar with the crewing experience before I went there to race. However, with Divya’s encouragement, I drafted a resume of all my cycling and crewing exploits and Divya sent it out to a few riders who were looking for crew to Race across America. 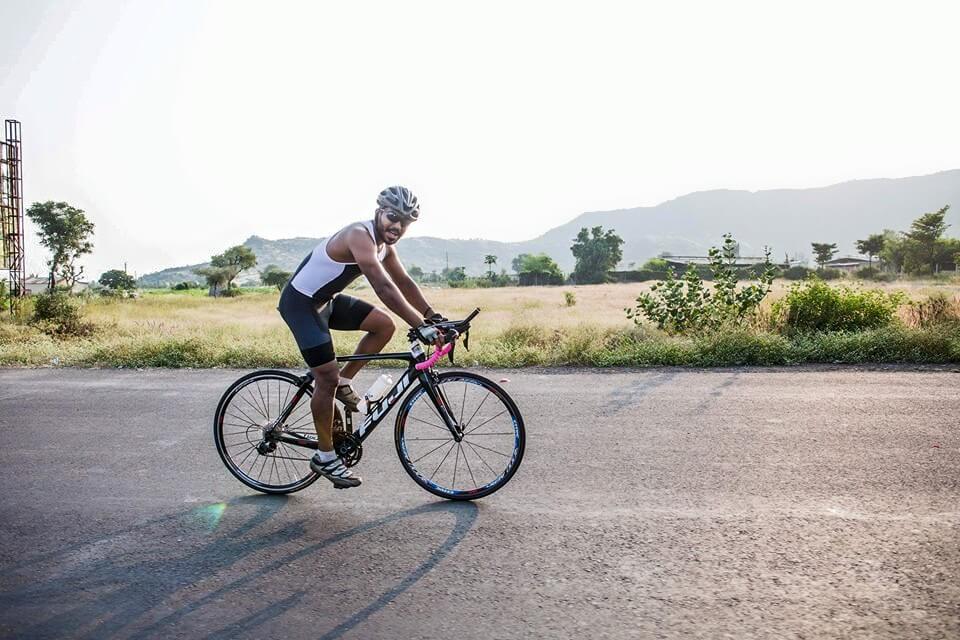 Within a couple of days, I was in touch with the amazing Joan Deitchman who gave me the green signal and took me on board as her crew member. All this happened about 5 months before the gruelling race started and the excitement had already kicked in. That’s when Joan gave me access to her RAAM wiki page with all her plans from nutrition to crew training neatly organized. Joan along with her advisor Andy sent us a lot of information and other hypothetical scenarios and asked us how we would deal in such situations. It was this pre-race prep that made me realise how big a mountain RAAM is. Even before the rider got to the start, there was a lot of planning that needed to be taken care of. Joan’s attention to detail was amazing as her plan seemed foolproof, covering every minute detail. She helped Chaitanya Velhal RAAM procure an American visa by providing all the necessary documents. Organising this trip proved to be a great learning experience for me, as well as the other members.

Three days before the start, I met the crew at Oceanside. The Deitchman crew were a varied bunch, with four crew from Canada, one each from Hawaii, Alaska and Puerto Rico and two Indians. We soon began our team building exercises. Joan, Veronica (Crew Chief) and Mike, each took us through the orientation of route books, walkie talkies, van set up etc. We had a set up of 3 vans and no RVs. We were to rely on motels along the route for crew sleep breaks.

We also had to attend crew seminars and van inspections. It was here, that Chaitanya Velhal RAAM got to interact with other racers and their crew, where I made it a point to talk to the solo riders. I was lucky to talk to Christoph Strasser, Anders Tesgaard, Shusannah Pillinger and other team riders including compatriots, the Mahajan bros, before the race. I was surprised to see that RAAM is a small community, where everyone knows everyone. There was a lot of energy and buzz at the start, as cowbells rang and people cheered on happily at the base. There were flags from the countries of the participating riders including our very own tricolour. The race begins at twelve noon right under the Oceanside pier as riders were flagged off every two minutes just like a time trial. As soon as Joan was off, three persons from our crew followed her in a follow van, while three more including me had to take a separate route to meet them at a town called Borrego i.e. 70 miles into the desert.

Starting from sea level, the riders experience a 2500 meters climb in the first 60 miles. After which, they go down this climb into the desert below sea level – the glass elevator’s sheer drop in altitude. This year, the desert was super-hot with mercury rising up to 48 degrees that took a toll on almost every rider. It didn’t spare the mighty Christoph Strasser, who later went on to abandon his ride because of lung infection. When I had met him before the race he seemed super confident and strong. This shows how unpredictable RAAM can be. Joan had to conserve herself here, so as not to burn out too soon. We constantly gave her ice packs to keep cool.

Besides, the desert was a mixed bag for me as it appeared to be charmingly rustic but unbearably hot and unforgiving at the same time. We had to stop for 40 minutes because of bush fires as the fire trucks battled to sober them down. Besides these dreadful conditions, RAAM also gave us some beautiful moments… For me, the beautiful monument valley lit in moonlight followed by the big Rocky Mountains was an unforgettable experience. After this, we had to go through the highest point of RAAM, ‘the wolf creek pass’, it was nice and cool up there, but the noticeably thin air made it difficult for riders to breathe. The same day we had to go through the second-highest point; the La Veta pass.

While the crew was working in 12-hour shifts, with 5-6 hours’ sleep each day, Joan was only sleeping 90 minutes every day. With the beautiful hilly parts of Colorado behind her, Joan reached the dreaded Kansas plains. These vast fields of corn and wheat on either side, with a plain road stretching as far as the eye could see, disappeared into the unknown. This makes for a very dreary ride and can prove gruelling in the case of headwinds. Fortunately, we had to face cross winds which weren’t as bad as headwinds, but not very easy either with Joan being blown to the left of the road. After 2 days of slogging through these boring plains, Joan finally crossed into Missouri, remarkably different than (from) Kansas, with its lush green rolling terrain filled with farms and mountains. Day 6 and Joan was still going strong mentally as well as physically and did not stop unnecessarily. Then came the wide Mississippi river which had flooded and drowned out the bridge that we were supposed to take. So we had to put Joan into the Van and ferry her across another bridge.

She resumed riding as soon as we were back on course. As we crossed into the states of Indiana and Ohio, the terrain was pretty with a carpet of green all over. As Joan cruised leaving behind a trail of her red blinker, she went through thousands of fireflies in the night sky that lit up the trees. In the last 250 miles, we came upon the mighty Appalachians, which aren’t as big as the Rocky Mountains, but the climbs here are short and steep. In spite of being sleep deprived and tired, Joan was often tackling 9 % gradients after complete 4500 km of biking across the terrain. 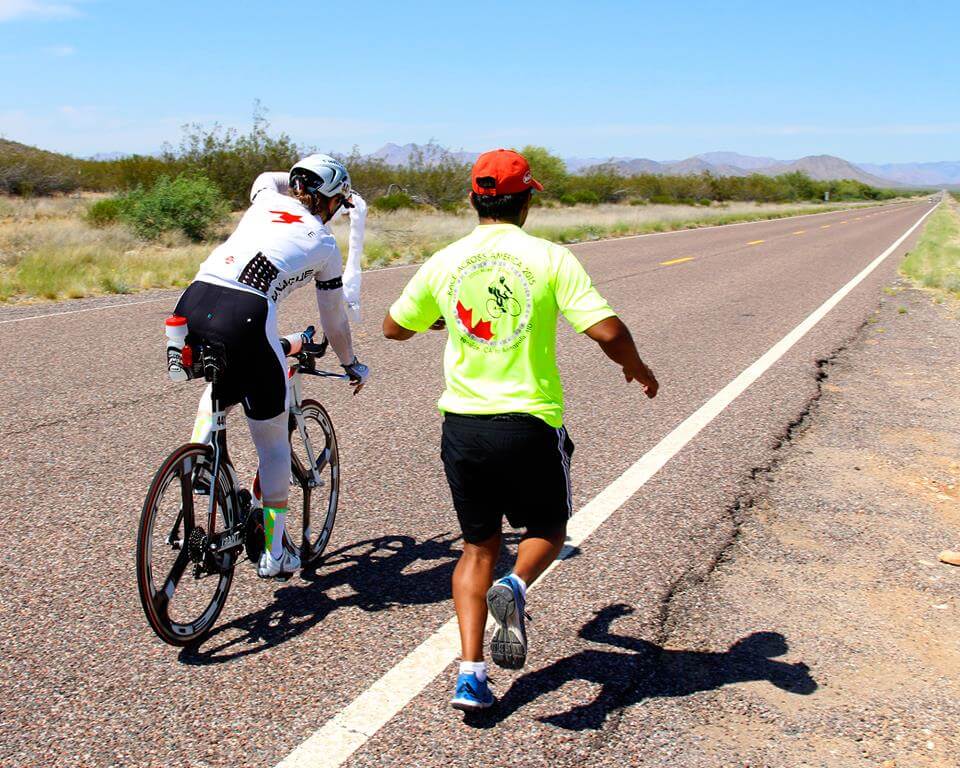 At one point, she was racing with a 4 man team who couldn’t believe their eyes as she kept overtaking them for 5 of their exchanges. Joan’s progress slowed down only after we were showered by the rain gods that made it tougher to ride through. She had a meltdown here and it took a lot of encouraging by the crew to get her back on the bike. Finally, after 11 days and 5 hours, we finished RAAM on the dock of Annapolis, where a sizeable crowd had gathered to welcome Joan. 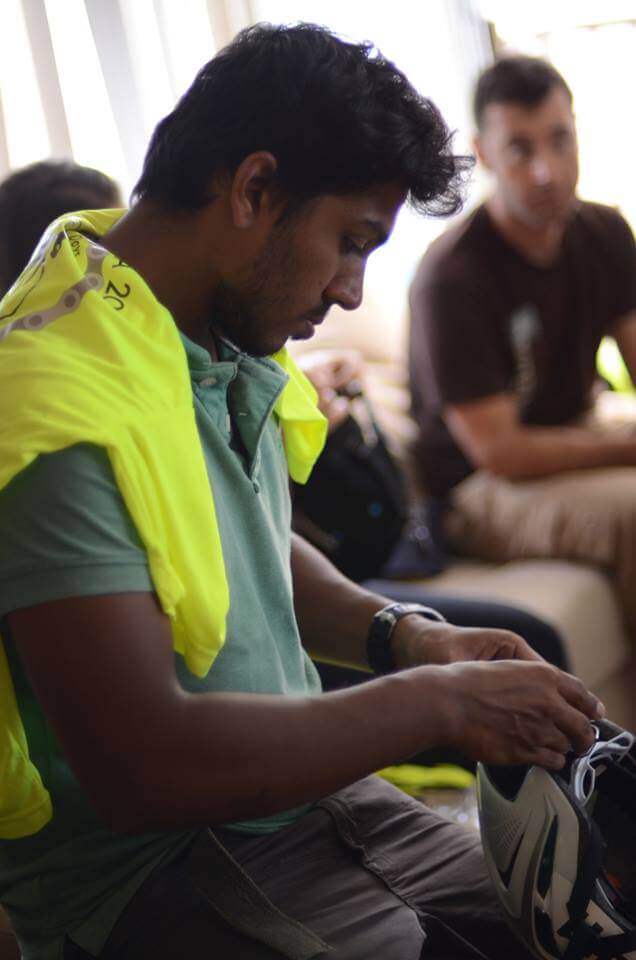 After seeing the monster that RAAM is, I had a new found respect for this race. The whole experience did not scare me but strengthened my resolve to get out there. I got to see the whole behind the screen preparations that these athletes do before attempting RAAM. The nutrition, the training, the ever-changing terrain, and climate of the race.   However, I am going to wait until 2017 for my RAAM attempt as I want to be 100% sure that I can do it.  Thorough training, along with a plan that can not only help finish but cross the line with the elite RAAM solos is what will help me achieve my dream.
Special Thanks to Chaitanya Velhal
In this article:
Up Next: