Two Indian Cyclists Conquered Race Around Austria and Made History

Two Indian Cyclists Conquered Race Around Austria and Made History

Here’s what they had to say during their interview:-

How does it feel on becoming the first Indian to finish RAA?

It is a great feeling to complete Race Around Austria which ended with a successful finish as per our target of below 100 hours. It was a major leap for both of us to participate in this race. We don’t take it as an achievement for ourselves but for the entire cycling community from India. The sport is still in a nascent stage and requires recognition at national as well as international level.

The efforts taken by Divya Tate to promote cycling in India are bearing results. The RAAM qualifier races Deccan Cliffhanger and Ultra Spice Race organized by Inspire India have promoted serious cycling in India and helped the cyclists to gear up for the international races.

I personally give credit to The Ultra Spice Race (1000 km) 1st Edition to provide me a platform to challenge my limits and instil confidence in me to dare to attempt Race Around Austria which is aptly considered as Europe`s Toughest Endurance Race.

How did the idea of participating in the Race Around Austria?

After winning The Ultra Spice Race (1000 km) in January 2017, Darshan Dubey (Crew chief in Ultra Spice Race) and I were quite excited and looking forward to participate in more exciting and challenging event. It was in the third week of March when the thought process of participating as a team in Race Around Austria started.

The overwhelming desire and passion to participate in an international cycling event led us to register for this event within the next few days. Before the registration, we could hardly consult anyone regarding the various aspects of the race, which were required for planning of such mega stature.

Why Race Around Austria?

Race Around Austria is regarded to be the toughest endurance bike race in Europe. RAA came into inception since August 2008. Since 2010, this race also has the distinction of being the qualifying race for the Race Across America.

The race route spanned along the borders of Austria on the highways as well as on the country roads. It involves a ride of 2200 km with elevation gain of towering 98,500 feet in the mighty Alps Mountains. Roughly it equals to climbing Mt. Everest three times during the race duration. The race starts from St. Georgen im Attergau from an elevation of 1400 feet and covers 09 major peaks of the Alps, the highest being the Grossglockner at the height of 12,800 feet.

The gruelling race has to be finished in a limited time frame of 108 hours that translates to 04 days and 12 hours of rigorous cycling. We had to ride a minimum of 490 km with elevation gain of more than 20,550 feet in a day to finish the race within the stipulated time limit.

Race Across America is considered as the toughest Endurance sporting event and on seeing the difficulty level depicted by the Race Around Austria, it will not be wrong in considering it as a Mini-RAAM.

What makes the race so special?

This race is a dream challenge for any passionate sportsman and thus is very revered amongst the global cycling fraternity. The race witnesses participation from the best of the best sportsmen around the world.  Mr. Ammar Miyaji, Nashik was the pioneer to participate in RAA (1500 km category) but sadly could not complete the event in the stipulated time limit.

Our aim, thus was to accomplish the unfinished agenda of completing the Race Around Austria and to become the first cyclists from India to finish an ultra-cycling endurance event in Europe. Determination of Man and blessings of God led us to be successful in the planned task.

How did you train yourselves for the race?

Our training program started after we registered for the event in the month of Apr 2017. At the outset, we approached Mr. Mahendra Mahajan (1st RAAM Finisher from India in Team of two category) for guidance. Mr. Mahajan was personally involved in making an outline plan of the complete event.

His Josh and enthusiasm was equal as if he himself was participating in the race. His initial guidance helped us in addressing the finer aspects of the race. The initial preparations included training ourselves focusing on the event as per priority. Next important task was to manage the crew apart from planning itinerary for travel and booking of flight tickets, accommodation and vehicles. 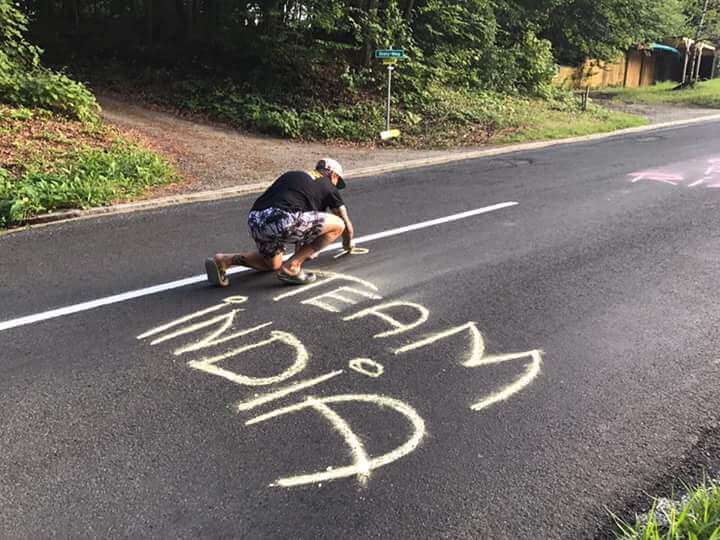 Our hunt for a coach began, but sadly there was no one ready to take over this responsibility as the time to train for an event which involved traversing in the Mighty Alps was too less . There being no other way, we decided to train ourselves and set the wheels rolling on by doing hill repeats twice a week at Kasara Ghat, Amboli Ghat and Saptashrungi gad. Long rides of about three hours duration kept us occupied for the little time which was spared in the week.

With Divya Tate agreeing to our request to be the crew chief for the event, she introduced us to Chaitanya Velhal, who agreed to coach us on the first day itself. Chaitanya Velhal is the fastest Indian cyclist to finish Deccan Cliffhanger Race (643 km in 25 hours 40 minutes), winner of Desert 500 Race 2nd Edition as well as he is twice IRONMAN with 2nd best timing in India (12 Hours 40 Minutes).

Chaitanya Velhal started our training when we barely had 100 days for the event to start. As a coach, he also agreed to be a crew member for the race. So it was a bonus package for us and his experience boosted our confidence to a higher level.

As part of the training of the riders for the event and better co-ordination with the crew members, two simulation rides were planned in the terrain similar to that of the event. The first simulation ride was scheduled on 27-28 May 2017 with an aim to cover 600 km with a total elevation gain of 24000 feet in 24 hours.

The route was from Pune – Lavasa City – Pune – Mahabaleshwar – Medha Ghat – Mahabaleshwar – Pune – Lonavala – Bhor Ghat – Lonavala – Tiger Hill – Lonavala – Pune. The weather was hot with the sun blazing in the peak of the summers and the riders confronted the notorious traffic jam of Mahabaleshwar but came out of it with sweat dripping but spirits high. We were successful in completing the simulation ride as per plan with adequate learning experience for the riders, crew and the coordination aspects for both of them.

The weather was comfortable this time with intermittent rains giving us the feeling of riding in Austria. We also applied our learning from 1st simulation ride to test. We had pre-planned proper rider exchange on time basis and the rider nutrition on the lines as it was supposed to be in Austria. The rider and crew were quite confident to take the Race Around Austria head-on after successful execution of the 2nd simulation ride.