After the Mahajan brothers emerged victorious in the world’s toughest bicycle race – the Race Across America, cycling in India escalated to a whole new level. While the victory in the relay category still remains fresh, the brothers had no intentions to sit back and move on with their usual lives as doctors.

In September 2016, the Mahajan brothers embarked upon another mission, the Golden Quadrilateral. Over the coming months, they planned, trained and dedicated themselves to achieving this goal. However, most of us are unaware of their battle behind the scenes.

To fill in this gap, we got in touch with Mahendra Mahajan to present you insights of the Golden Quadrilateral that will soon get their name in the Guinness book of records. 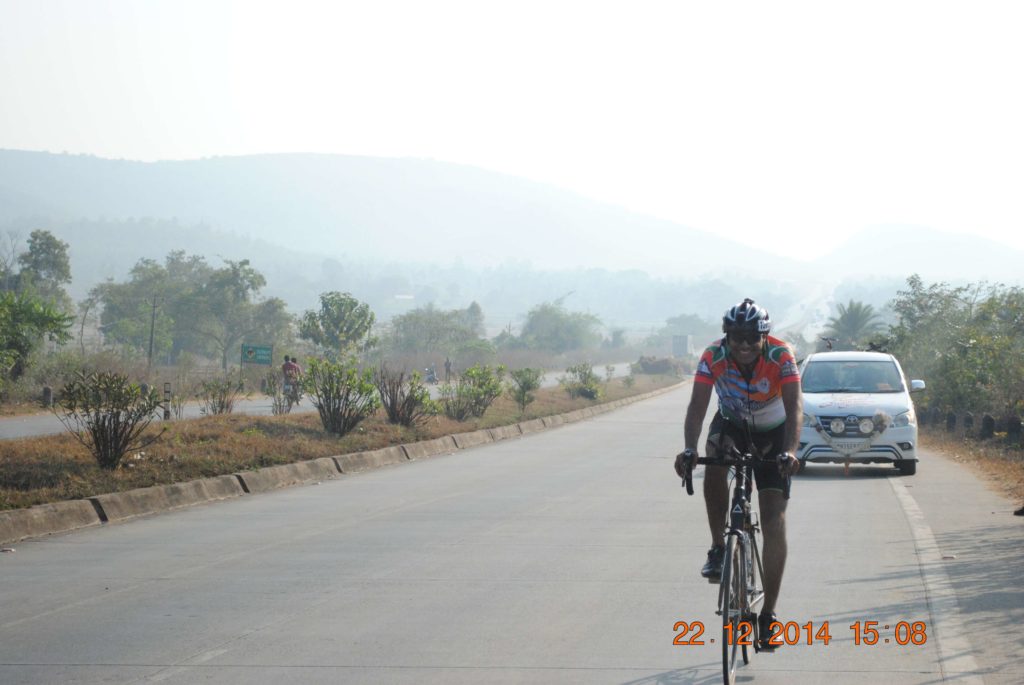 What are your future plans?

As of now, nothing is planned.

However, in the future, we definitely intend to do activities and events to spread awareness about our campaign -“Follow the Rules & India will Rule”.

Can you tell us the requirements for the Guinness World Record?

We were required to maintain the following

1) Log book- This was one of the most important requirements for the Guinness World Record. We had to maintain a log book for each rider wherein we were required to denote our individual time on the bike. It was a very tedious task as we kept taking turns every 15 to 40kms. As a result, we were required to make multiple entries, which had to be signed by a witness/third person/local citizen.

2) The witness form has to be filled separately with the name, address, phone number, email id and the business card of the witness.

3) Garmin data (GPS tracking device) of every ride were to be saved in separate devices for each rider.

4) Photographs and recordings of rider with landmark and milestone were also to be taken.

We completed the GQ, starting from Gateway, Mumbai heading towards Chennai, followed by Kolkata, then Delhi and back to Gateway, Mumbai in 10 days 19 hours and 41 minutes.

Guinness wanted a maximum of 4 months to process the record application and they didn’t respond until quite late, so we had to pay 1000$ processing fee, after which they sent us guidelines. 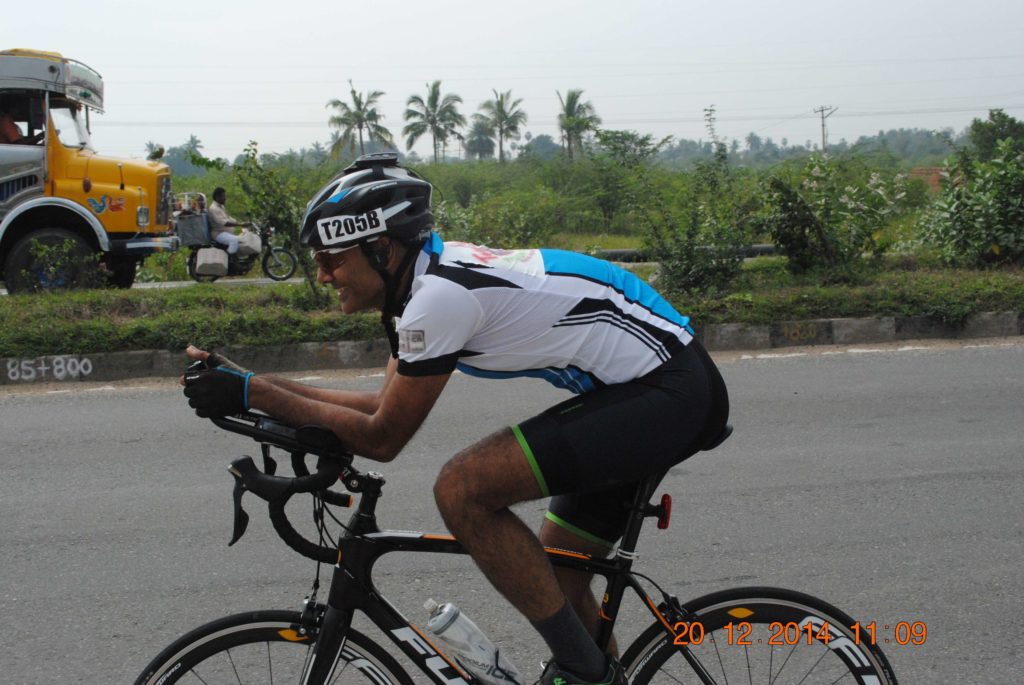 How did the idea of attempting the Golden Quadrilateral come to your mind?

After our RAAM victory in the relay category, the popularity of cycling got a boost in Nashik and the rest of Maharashtra. That’s when we thought of doing an event in India which was longer than RAAM, will give cycling a boost and will be more relatable as it will be conducted in India.

As the length and breadth of our country is less than the total distance of RAAM (4860 km), we decided to do the Golden Quadrilateral Challenge (GQC) i.e. Highways joining 4 major metros of the country—the North (Delhi), South (Chennai), East (Kolkata) and West (Mumbai). The length of GQC is 5957kms, approx. 6000kms (almost 1100km more than RAAM), and covers most of India.

When did you start working towards your new goal, Fastest cycling on the Golden Quadrilateral?

I very well remember it was the month of September 2016 when we applied for the “Fastest Cycling on the Golden Quadrilateral in the relay category (team of two).

What were the obstacles you faced during the Golden Quadrilateral Challenge?

1. As you are well aware about the traffic sense in our country, cyclists have to ride extremely cautiously no matter what time of the day. In spite of having a direct follow the vehicle, we were still required to be very cautious. At times during our ride, we had to halt abruptly as the trucks crossed ahead of us and so on.
Fortunately, no falls!

2. Besides the road obstacles, we also had harsh weather conditions to deal with. As we chose to attempt the GQC in the later half of December, we had to deal with extremely cold nights and dense fog.

3. While road safety and climatic conditions were obstacles, as a rider I developed saddle sores on the second day of riding. These sores were quite painful and inhibited my natural riding as it restricted me from using muscle power.

4. Roads in some sections, particularly 150 km in Jharkhand and Bihar were bad with pot holes, otherwise the roads were overall good. 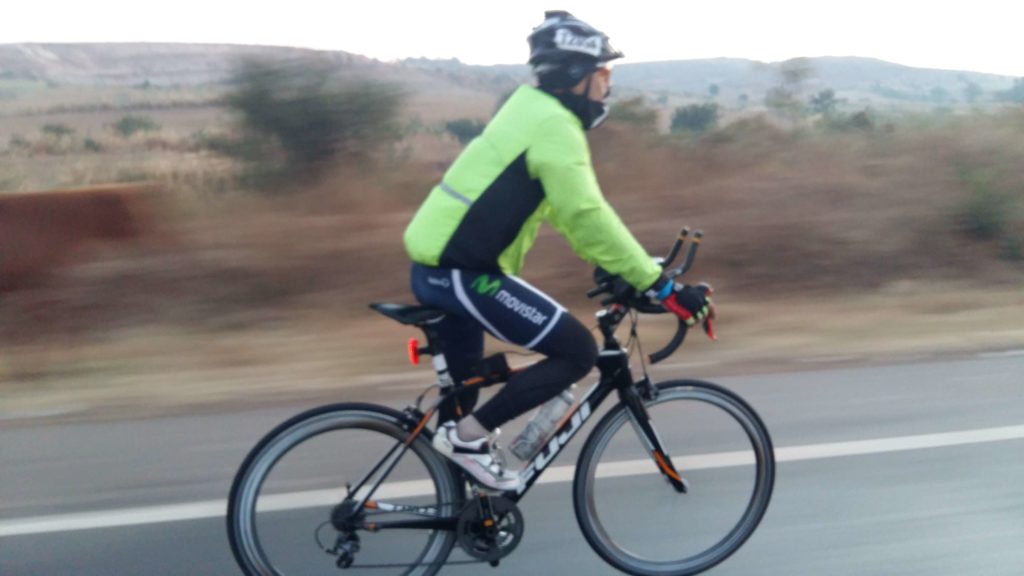 How did you prepare for the ride?

Post RAAM (after June 2015) it was nearly one year and four months. Until that very day, we had not done any long distance rides. As a result, we had also put on eight Kgs of weight that had to be shed.

That’s when we started our training to get back in shape for the Golden Quadrilateral Challenge.

With the right coaching under Miten Thakker, three months of dedicated training got us back to 80% of our efficiency (as compared to RAAM training).

When compared to RAAM, how was the Golden Quadrilateral different?

To be honest, from my personal experience, RAAM (Race across America) is harder. However, GQC is dangerous (Due to traffic sense of vehicles).

Besides that, the climbs are much more and temperature variation are extreme in RAAM. However, the distance of GQC was almost 1100 km more as compared to RAAM, so had to spend almost 10.5 days on saddle. 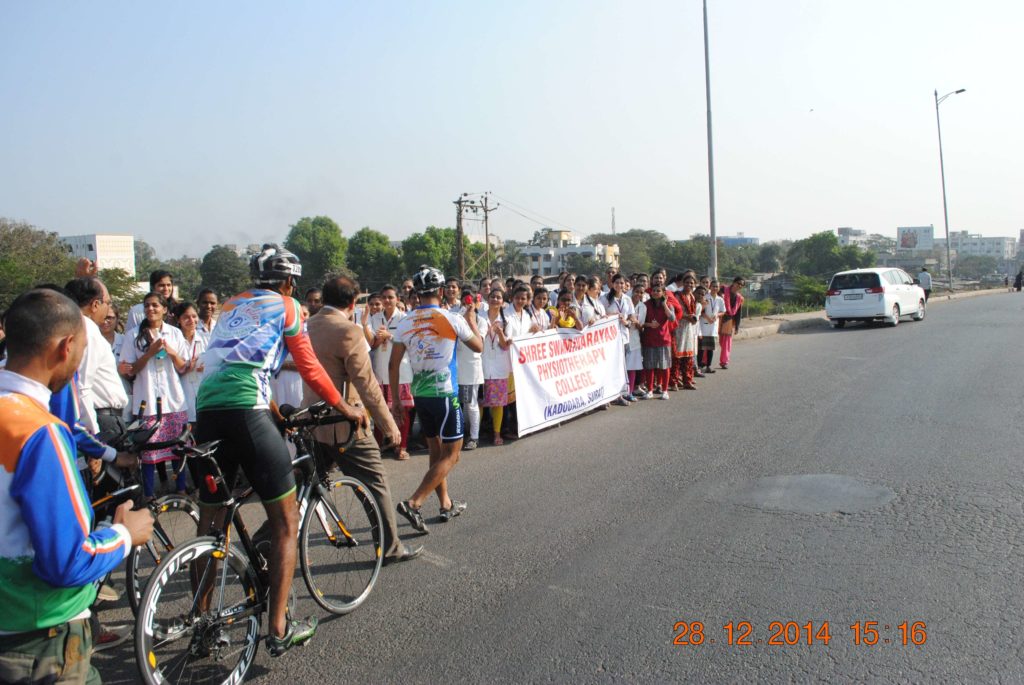 During our journey, we met people with different attitudes.

Most of the motor cyclists tend to slow down and ask the usual questions which many of us cyclists riding long distance on highway face, like from where to where, any prize, cost of bike, geared bike etc. We would request them to collect the Pamphlets (which had information about GQC mission and slogan).

Most of them after reading Pamphlets, they used to cheer us up after knowing the ride is dedicated to the nation with a slogan “Follow the Rules and India will Rule”. Some also offered if we needed any help? We also met two people who had done GQC on a motorbike and knew the gravity of the expedition and were amazed to see us doing it on a bicycle.

While passing Vijayawada, we met college students on a motor bike who were aware of what GQ is and appreciated our initiative.

We also met students from the medical college in Rajamundry, AP & Himmatnagar Gujarat & Physiotherapy, who were energetic and eagerly waited to welcome us with their teachers. 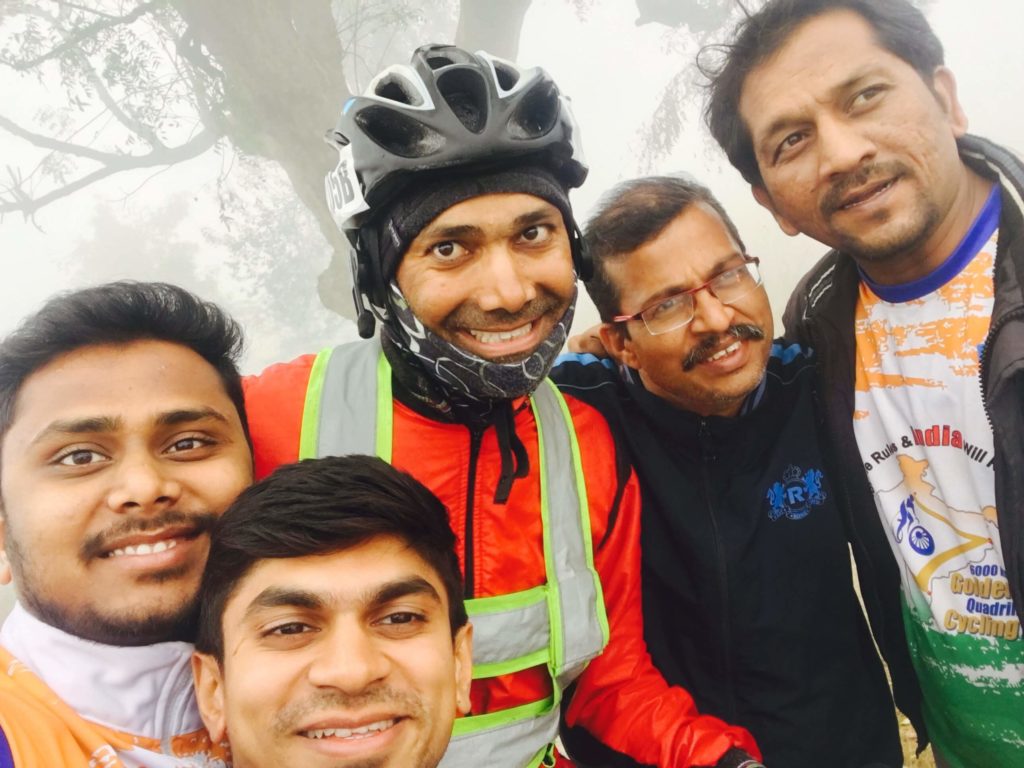 Tell us something about the relay ride strategy that you followed during those 10 days?

When it came to riding during the day time, we rode 15-40 kms per rider.

While during the night, each one of us rode for around 4 – 5 hours. This gave enough time for one of us sleep and recover. This left us fresh to ride again.

Enlighten us with your nutrition plan?

During our days on the road, we enjoyed all three meals of the local region. Besides that, we had salted dry fruits, dates and Chikkis. During longer night shifts we used energy bars of Just Eat (Sakas foods) and GU gels.
We also made use of Enerzal and Rehydrate to restore our electrolytes. 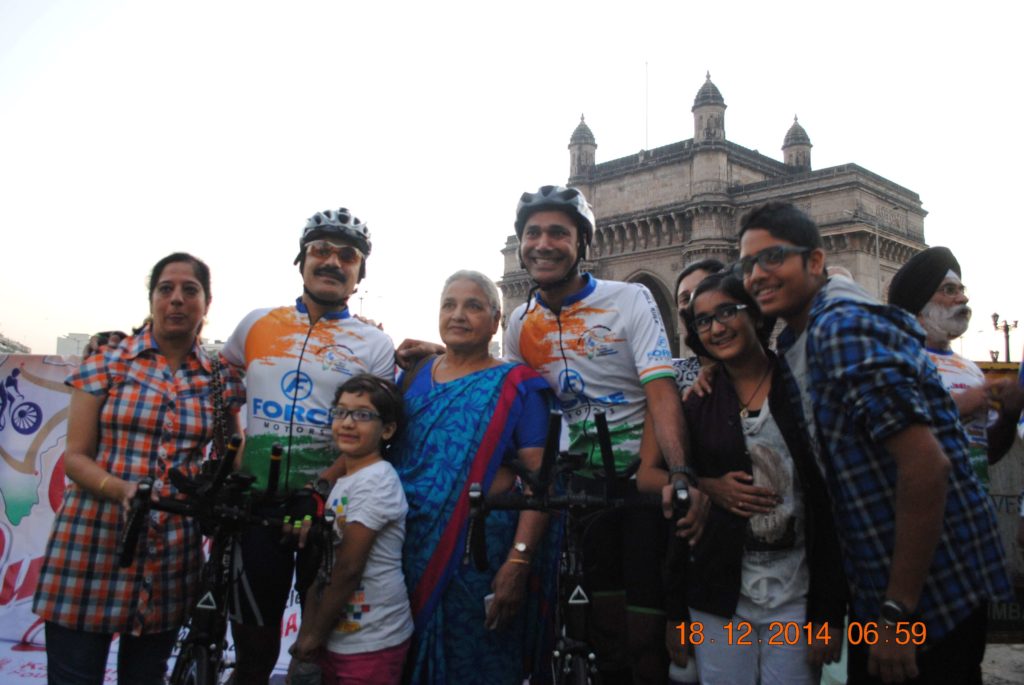 Any unique tips for the cyclist who participate in BRM’s?

1. Eat before you are hungry and drink before you are thirsty!
2. Use a good pair of tube and tires, if you are worried about flats, a liner between tube and your bike tires can be very useful.

3. All brevets can be done on an MTB if you love its stability and sturdiness. However, if you want to save 10-20% more time, then a road bike is a smarter choice. As it is more important to be mentally and physically tough than the make of your bike.

Has the spread of awareness about traffic rules been appreciated?

The flyer with our campaign slogan “Follow the Rules & India will Rule” was very well appreciated by the people in our country. We were surprised that people immediately started following traffic rules after reading the flyers.

Any advice you would like to give other cyclists who would want to attempt the Golden Quadrilateral Challenge in the future?

Whoever is planning to attempt the ride in the future, do not underestimate the distance of the Golden Quadrilateral. Make sure you train hard and get the right support crew who believe and support you in every way.
Most importantly, ride with a positive attitude!

Also, don’t forget to be cautious, follow traffic rules and enjoy the view. India is a beautiful country! 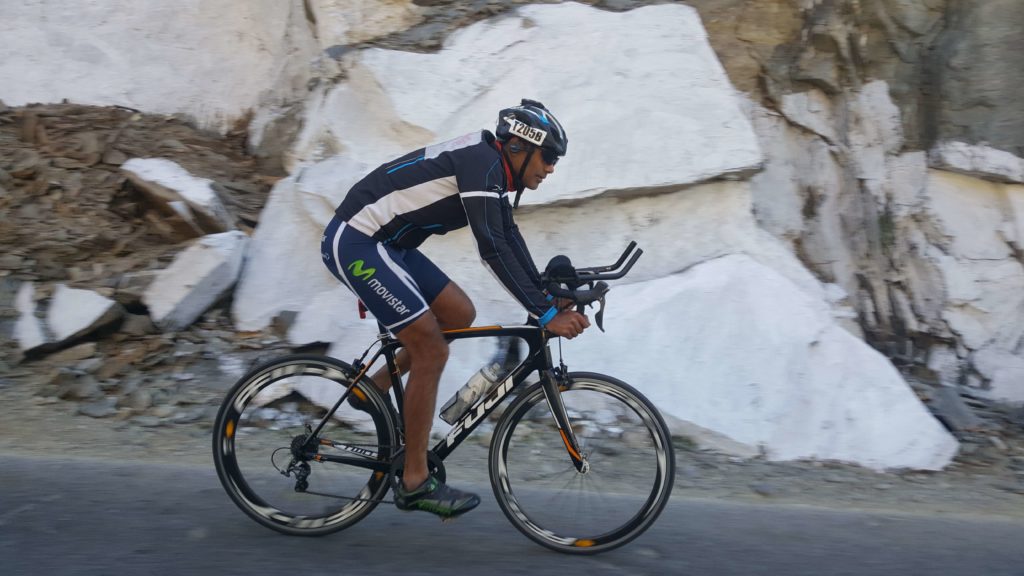 Who were your team members and how did they provide support?

We had a combination of an energetic youngster who was experienced cyclists and runners and were well equipped when it came to driving.
Their names are as follows:-

Lastly, we had our dear friend and coach, Miten Thakker from ‘Cyclozeal’.They were all very supportive.

We could have improved our time of 10 days 19 hrs to complete GQC mission if:-
a) If we had not to complete the official formalities and guidelines given by Guinness – locating police station/ govt. office in 12 cities, getting photographed and recordings by stopping by the side of major landmarks in the cities, getting witness forms and log books filled.
b) Also, we would have loved to spend more time with our doctor friends who waited for hours by the road side to welcome us.

Lastly, we expect more and more riders to attempt and break the record in the near future.

Special thanks to Mahendra Mahajan

In this article:The Golden Quadrilateral Challenge, The Mahajan brothers
Up Next: