Not long ago, our founder Abhishek Tarfe was invited by Tour de Chhattisgarh to conquer the hills of the north. With the whole idea to promote cycling in central India, our founder took off with his road bike. During his 4 days at the tour, he came across cyclists from different cities of India. Some were hardcore into cycling, some came to enjoy the experience and some needed a break from the desk job.

However, there was one who stood out from the rest. Calm, jolly and always ready to help, Ashish Patni is our man. His love for cycling not only made him do something for the sport but also got him the tag, Captain.

Find out how he went on to fall in love with cycling, promote it in Raipur and becomes everyone’s favorite.

Every story has a beginning. Before we begin, how did you fall in love with cycling?

Ashish Patni: Since childhood, I was inclined towards sports. I represented MP state in Junior National Football for three consecutive years. I still remember the day when I was in Chandigarh sector 17 where I saw a man doing bike stunt. It fascinated me a lot. I talked to him and visited his store “Firefox”. Later I thought to start a bicycle store in my City Raipur but after initial startup somehow it didn’t work out. However, I ended up buying a Firefox Road Runner Bicycle. Those were the days in the year 2012 a group of 4-5 riders including me started cycling in Raipur. That’s how my journey of cycling started.

How different is cycling in Raipur as compared to other metropolitan cities?

Ashish Patni: Cycling in Raipur is much more interesting as compared to any Metropolitan City. Raipur has less traffic as compared to other cities and has well-developed roads and infrastructure. An entirely new city named Naya Raipur (Now renamed as Atal Nagar) is being developed by the government. Atal Nagar is a Cyclist’s paradise having wide and beautiful road with almost zero traffic as it’s still under development phase. It has beautiful landscape on both the sides of the road that adds to the beauty of cycling. It’s a calm and peaceful environment makes cycling a form of meditation. Almost all the Cyclist nowadays prefer to go to Atal Nagar for Cycling.

Also, cycling is an emerging sport in our city and it’s gaining a lot of popularity. Thanks to the new high-end bicycle stores which have come up in our city.

There are some bicycle clubs also that keep organizing events and rides for recreation, competition, etc. This attracts many amateur and professional cyclists to our city. So in all Cycling in Raipur is fun.

Tell us something about cycling in Raipur? Favourite place, favourite food, and the best bike shop?

Ashish Patni: From the days when only 4-5 riders started cycling as sports to almost 500+ riders now who are active on a regular basis on cycling circuit, Raipur cyclists are on the rise. This shows the potential of the place and a very bright future of Cycling in Raipur.

There are a lot of people in our city who are pursuing cycling seriously and regularly participate in a lot of events which are held in and around the city. This includes people from all age group, varied professionals, school/college going children and even homemakers.

There are many who want to take cycling as their profession and have already started training for it.

As I mentioned earlier, the most preferred place of Cycling is Atal Nagar (formerly Naya Raipur). People also go to Kamal Vihar and University for cycling which again has good roads and less traffic to make an ideal place for cycling.

Raipurians are fond of eating. Samosa, Jalebi, Poha, Vada, and chai are a few items that are our favorite of all. Near Naya Raipur is the Airport canteen, Police Canteen and Jan Suvidha Kendra (JSK) canteen which is a great breakfast point after every ride. In the city, the most preferred place after cycling is Lathmaar Chai at Purana Bus Stand for the kadak chai and masala chai. Apart from these places, I think that any roadside stall also serves good and refreshing tea and snacks for riders.

As Raipur has emerged as a growing economic capital of central India, many stores providing good quality and of international standards sports equipment have come up to cater the needs of its people. To name a few we have The Bicycle Hub, Decathlon-Raipur, Aarya Bikes where we can get all the equipment and gears related to cycling.

What is that one thing you don’t forget while heading outdoors for your ride?

Ashish Patni: There are few essentials which are always with me when I’m riding like Helmet, Puncture Kit, Air Pump, front and backlight, reflector, hydration drink, mobile and some money. These are not only essentials but mandatory too.

How have you helped the cycling community in Raipur grow?

Ashish Patni: After I started cycling, my interest grew and along with my friend and fellow cyclist Mr. Abhijeet Singh, Mr. Prabhat Singh and Mr. Sanjay Singh started a cycling club named TourDeRaipur in July 2014. The purpose of the club was to connect like minded-people having the passion for cycling so as to motivate and inspire each other for cycling. But then we wanted to reach out to more people so thought to organize events. Our first event was Scavenge de hunt which we organized in the city. There was a good response from the people and we started organizing more events. Besides conducting cycle rides and events, we’ve also helped and assisted many other organizations in organizing cycling events and have provided technical and logistics support.

Recently from the past one year, we have also been associated with Chhattisgarh Tourism Board (CTB) to organize cycling events to promote tourism in CG. The flagship program Tourism On Wheels under which we have organized many events like Tour de Sarodha-Dadar in Feb 2018, Tour de Gangrel in July 2018 and Tour of Naya Raipur etc.

We’ve given talks at schools and colleges to encourage students to take up cycling as a sport. 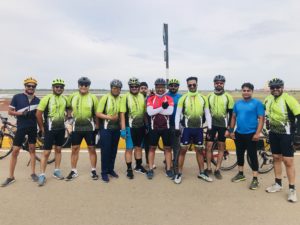 What has cycling taught you in life?

Ashish Patni: Cycling has made me realize that we have endless potential. Hence, make sure you always challenge your limits. Cycling has also made me more focused, disciplined and goal oriented. A very famous quote “To maintain the balance in life, you have to keep moving” has always inspired me to move ahead in life. 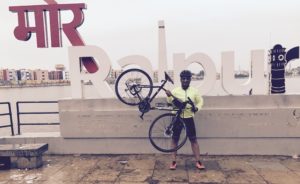 You’re the captain of Tour De Raipur, how did you get the tag?;)

Ashish Patni: Nothing official about it but since I always had taken initiative to bring people together, to organize events, to liaison/coordinate with department/ agencies, etc. for rides and also to allocate responsibilities and duties to the club members, so out of love they started calling me ‘Captain’. 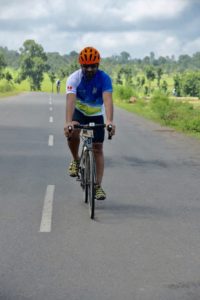 One thing you will take away from the Tour De Chhattisgarh?

Ashish Patni: Confidence – that I too can conquer the mighty hills.

What was your favourite part of the tour on and off the bike?

Ashish Patni: I was amazed to see the beauty of Chhattisgarh. Though I am born and brought up in this place, still I have never been to the route of TDC which was very well chosen by the team of Cycle Safari and working elements (WE). Planning, coordination, execution, and hospitality of the organizing team was superb in the tour. I had the privilege to ride with some of the great cyclists of India and abroad and to interact with them and learn from their experiences. All this rich and varied experiences of the people whom I had made connect within this event will certainly help the Cycling community of Raipur and my club TourDeRaipur. 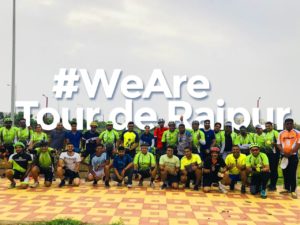 Any advice you would like to give a cyclist from India who is looking to get into the sport?

Ashish Patni:
1. Training and experience are the foundations of any sports and for a cyclist, this means making lots of miles on the road. So hit the road whenever you can. Keep practising your skills and improve them. Also increase your power, build strength and eat right-which is very important for every sports person.

2. Join a Cycling Community Club and participate in group rides as cycling alone can be very boring and lonely. This will help motivate you and also give you the opportunity.

to learn from others. Ride with people who are better than you and always participate in local events and competitions. Enter in bigger contests as you become better and faster.

3. Last but not least, your commitment and passion will be the only driving force that will take you a long way. So stay focused.

How can Velocrush India help you promote cycling in Raipur?

Ashish Patni: Just keep us updated about any future event which you come across and also about the latest development in the field of Cycling in India and abroad. Keep posting cycling tips and everything related to Indian cycling as this helps us stay updated and grow.

In this article:ashish patni, Tour de Chhattisgarh, tour de raipur
Up Next:

7 Reasons Every Cyclist Must Have Tour De Chhattisgarh on Their Bucket List!